Fail 1.  Guy buys an FN-45 Tactical, which is FN’s .45 ACP polymer pistol with a red-dot mounted to the slide, barrel threaded for a can, and high-rise sights to co-witness the dot.  It’s a pretty cool gun.  Guy decides that he’s going to modify a Hi-Point .45 to be like his FNP-45 because…uh…you know what I have no idea why you would do that.  So he decides to mill the slide down and mount a $30 off-brand red-dot on the gun.  Hilarity ensues. 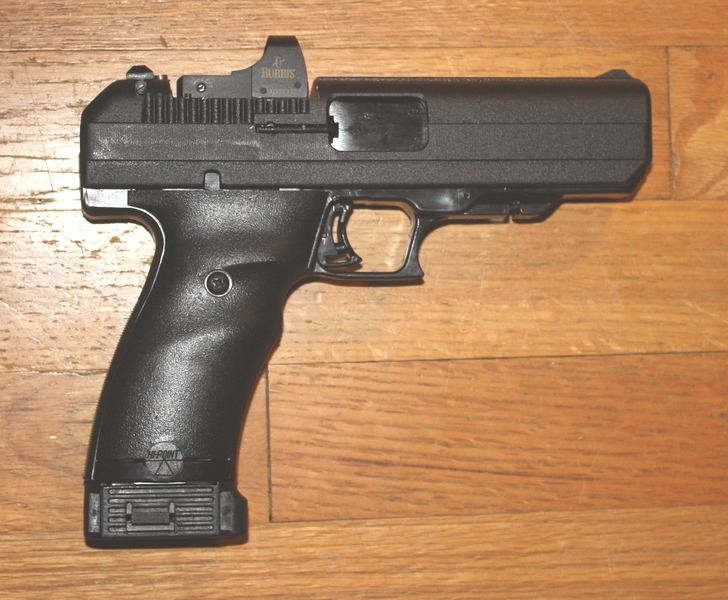 I did not know you could make a Hi Point uglier, but HEY LOOK AT THAT.

Now in all seriousness, this is fail for reasons other than cosmetic issues.  The Hi Point is a blowback operated gun, which means it relies on the mass of the slide and the strength of the spring to keep the gun in battery while you set off an explosion in the barrel.  Compromising the weight of the slide could cause the gun to open up too soon, which would be a bad, bad thing.  Additionally, because of the violent blowback operation, the odds of that cheap-o red dot holding a zero for more than 50 rounds are in the area of slim and none.  It’s going to get whacked around bouncing on that slide, and that’s not going to help your team.  Of course, the final reason why this is fail is because HE JUST BOUGHT AN FNP-45 TACTICAL.  Seriously.  You already have a high quality firearm made of proper materials that does exactly what you’re trying to make this gun do, why in heaven’s name would you do this?

Moving on, we have Fail 2 – also more Hi Point fail but now with danger!

That is a Hi Point that was chambered for .40 S&W.  As you can see, it has suffered a catastrophic slide failure of the zinc alloy slide right along the ejection port, which is the weakest part of the gun.  I have seen Walther P22s (which have slides made of the same alloy) suffer this exact same failure, albeit not as completely after a diet of CCI Stingers, so seeing that a .40 can blow up a zinc slide doesn’t surprise me in the least.  The .40 S&W is an absurdly high pressure round.  Sometimes it blows up perfectly good guns that I would actually recommend people buy.  The problem with the Hi Point design is that it is entirely dependent on the weight of the slide for its operation, and if that slide is a poor quality casting, then the gun is much more likely to fail.

Now, Justin is still doing the Hi-Point Throwdown, which is primarily focused on the ergonomics and shootability of the pistol.  I’m not going to lie though – I have shot enough .40 through other platforms and seen its potentially destructive powers that shooting it through a Hi Point would make me all kinds of nervous.  That gun blew up after only 200 rounds.

I’m not saying don’t buy a Hi Point.  If you really want to, knock yourself out.  It’s your money after all.  I am saying that doing things like milling the slide on a blowback gun that’s made from a zinc casting isn’t smart, and neither (in my opinion) is shooting a gun with a zinc casting slide chambered in .40.  These are things I would not do, and I would strongly encourage you to not do either.  If you must have a Hi Point, get the 9mm carbine.  That one works, and I’ve never heard an stories of them blowing up.