As usual, major Top Shot spoilers follow beneath the jump.  Although I’m no longer a contestant and don’t know what’s going to happen from week to week, I’m still going to provide an insider’s view on what went down.

Okay, so everyone gets back from my elimination, and quite frankly I’m glad to see that they’re trying to put the drama behind them.  I want Blue Team to be strong and I want them to keep winning, so Blake’s line at the beginning about moving forward but watching out for Adam just in case is a good thing.

Moving on to the practice.  Colt Single Action Army revolvers, aka “Peacemakers”.  I almost cried when I saw that was going to the be the gun, and here’s why.  This picture taken with my iPhone is of what I would 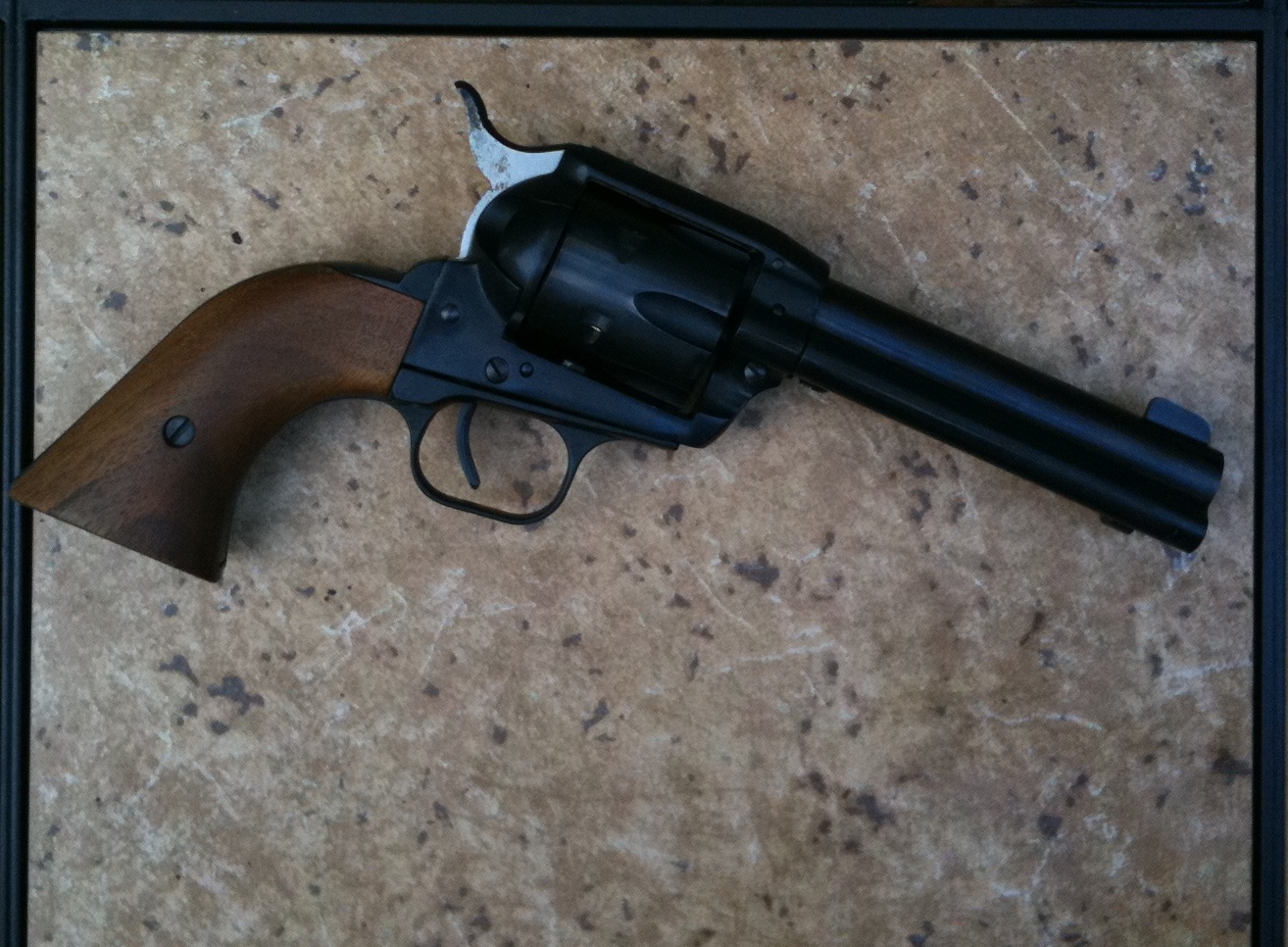 call “my very favorite gun”.  This was my 21st birthday present from my father – in and of itself it’s nothing special, just a .22 Magnum single action revolver.  It’s a Euro knockoff of the Ruger Single Six.

And I love it.  This gun started a love affair with single action revolvers, and it’s also my “rehab” gun.  Whenever I feel like I need to practice the basics of sight alignment and trigger control, this is the gun that I take out of the bag.  So seeing single action revolvers in the team challenge made me very happy, but also disappointed that I missed a chance to shoot my very favorite style of firearm.  C’est la vie.

Back to the episode – the expert was the first one that made me actually go a little fanboy-ish, Spencer Hoglund, better known as jillion-time SASS Champion Lead Dispencer was an obvious choice for this challenge.  He worked with the shooters on the fundamentals of running a single action firearm efficiently, including loading and rapidly hammer/trigger movement.  This was the first challenge that involved the competitors directly loading the gun, and that became a key element in the challenge.

The actual challenge day looked miserable.  In a rare High Desert rainstorm, the temps had to be low with the rain coming down, and that can’t make shooting a lot of fun.  The teams had to shoot a “shooting gallery” full of glass bottles, wooden planks, lanterns, and other sundry fun things to blast.  Blue Team went first, and had very few misses on their entire run, with everyone except for JJ and Adam going 10 for 10 with their shots.  That’s awesome.  Red Team stepped up to the line and a had a lot of trouble getting it done.  My buddy Denny, the Mounted Shooting Champ had some issues with the Colt, Andre had issues getting his hits, and so did Kelly.  Only Brad and Pete were really successful with getting their hits on target.

The elimination challenge ended up as Andre vs. Kelly.  To be honest?  I thought this elimination challenge was kind of ridiculous.  Each guy had seven shots to hit five playing cards, the guy with the best hand wins.  Here’s the problem – neither Andre nor Kelly are poker players.  On the first run they both ended up with royal flushes, so when they shot the tiebreaker, Andre’s lack of poker knowledge, not his marksmanship was what did him in.  He actually shot better than Kelly in the elimination challenge, but because he wasn’t quite as quick on the uptake of poker rules as Kelly he got eliminated.  Honestly?  That challenge was pretty weak, if you ask me.  When you compare it to epic challenges like severing a rope with a bullet or shooting targets while coming down a zipline, it just doesn’t stack up.

That’s it for episode 6 – next week’s show looks pretty cool, with the teams replicating some of the greatest trick shots of all time!