I went down to Beech Grove firearms yesterday to pick up the Ruger SR9c that I’ll be using for the Quest for Master Class, sponsored by Ruger Firearms and Downrange.TV.  The Ruger SR9c is designed as a carry gun, so what did I do after pulling it out of the box?  Whip out my iPhone and start taking pictures compared to other guns that I’ve carried.  First, three carry guns together – the Ruger SR9c, a ParaUSA LTC 9mm, and my S&W Model 60 Pro Series. 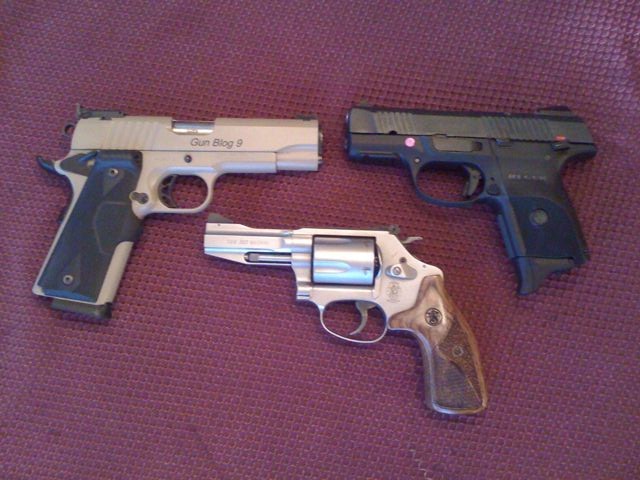 On a side note, I deeply love my iPhone.  If there is one thing that has revolutionized blogging for me, it’s the ability to take decent quality pictures and upload them to the internet all from one device.  Anyway, back to the guns.  You can kind of get an idea for the relative size of all the guns in that picture – dimensionally speaking, the Ruger is the smallest of the three.  It’s shorter in both length and height than the Commander sized 1911, and shorter in OAL than the Model 60.  In defense of the 60, a lot of that length comes from the 3 inch barrel, which is a little unusual on J-frame revolvers.  The weight of the SR9c is another factor – unloaded it weighs a little bit less than the J-frame and the LTC, although this was measured by the tried and true “heft” method.  But it holds almost double the ammo of the J-frame, and 1 more round than the LTC.  Plus, if I want to use the full size mags from the SR9 with the adapter, I can get my little gun up to 17+1 rounds of ammo. 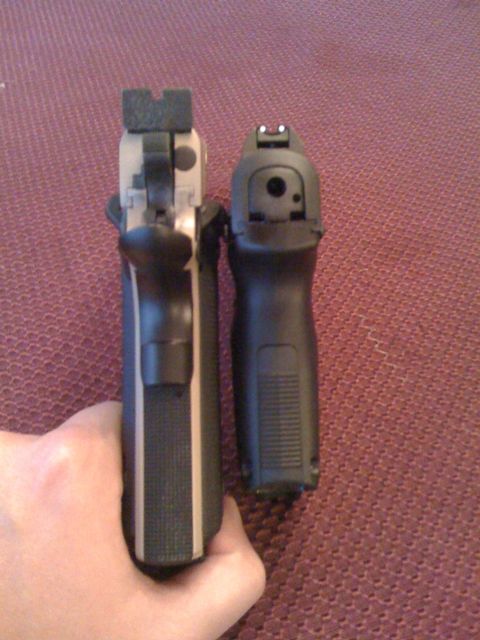 Yesterday, when discussing the merits of a long barrel vs a long grip for concealment, the topic of how thick the handgun is came up as a factor in its relative concealability.  The 1911 style pistol is widely known for it’s ability to be readily concealed and carried, and the LTC, with it’s aluminum frame and 4.25 inch barrel is one of the best at it.

Yet, the LTC is in fact thicker than the Ruger SR9c.  In a couple of key areas, the Commander sized 1911 is thicker than the SR9c – obviously the ambi thumb safety isn’t helping, and the awesome Crimson Trace Laser Grips are a bit bulkier than the standard grips on a 1911.  But that aside, the SR9c is well, skinny.  I don’t have big hands, but I’m able to get a lot of meat on the gun, which means faster follow up shots and faster hits on target. 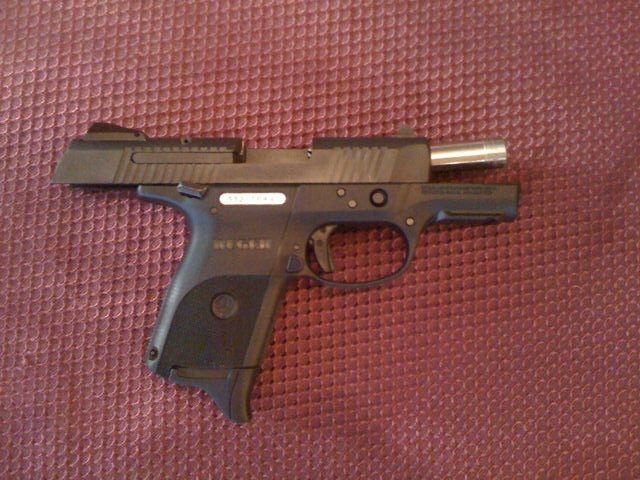 The Ruger S9c comes with a 3.5 inch barrel, 3 dot sights, a single 10 round magazine and a 17 round magazine with the adapter to give you a full grip profile.  For the matches that I’ll be shooting this gun in, I’ll definitely be using the full grip profile magazines, although I need to be careful to not catch the meat of my hand in between the adapter and the magwell.

The trigger on both of the SR9c pistols that I have measured at about 6.5 lbs – after shooting revolvers with 8-12 pound triggers for the last year, that felt like pulling a feather.  I think with a couple of thousand dry fires and some live ammo, it will settle in quite nicely.  In preparation for the Quest for Master Class, where I’ll try to achieve the rank of IDPA Master in Enhanced Service Pistol and Stock Service Pistol using this gun, I’m going to be shooting the Ruger SR9c in the upcoming USPSA Indiana State Section Match.  That should be a nice little “warm-up” before the Quest starts in earnest.

I think the weirdest thing for me to get used to is that the slide stop on the SR9c isn’t also a slide release.  With the slide locked back and a full magazine inserted, pressing down on the lever doesn’t release the slide.  You need to slingshot the slide to get it to go forward, and that’s not a technique that I’ve actually practiced that much.  I’m actually toying with the idea of only doing retention reloads in IDPA matches…just to amp up the difficulty of things.  We’ll see about that!

The Quest for Master Class and all future articles are sponsored in part by Ruger Firearms, who have provided the guns being used for the series that will appear starting in July on DownRange.TV.  Find Ruger, and all their excellent products online at www.ruger.com.