I have to hand it to the staff and organizers of the 2010 Area 5 championships, it was a phenomenal match.  My first Area level match, and it definitely gave me a taste of the variety and complexity you see when you get to the higher major match levels. 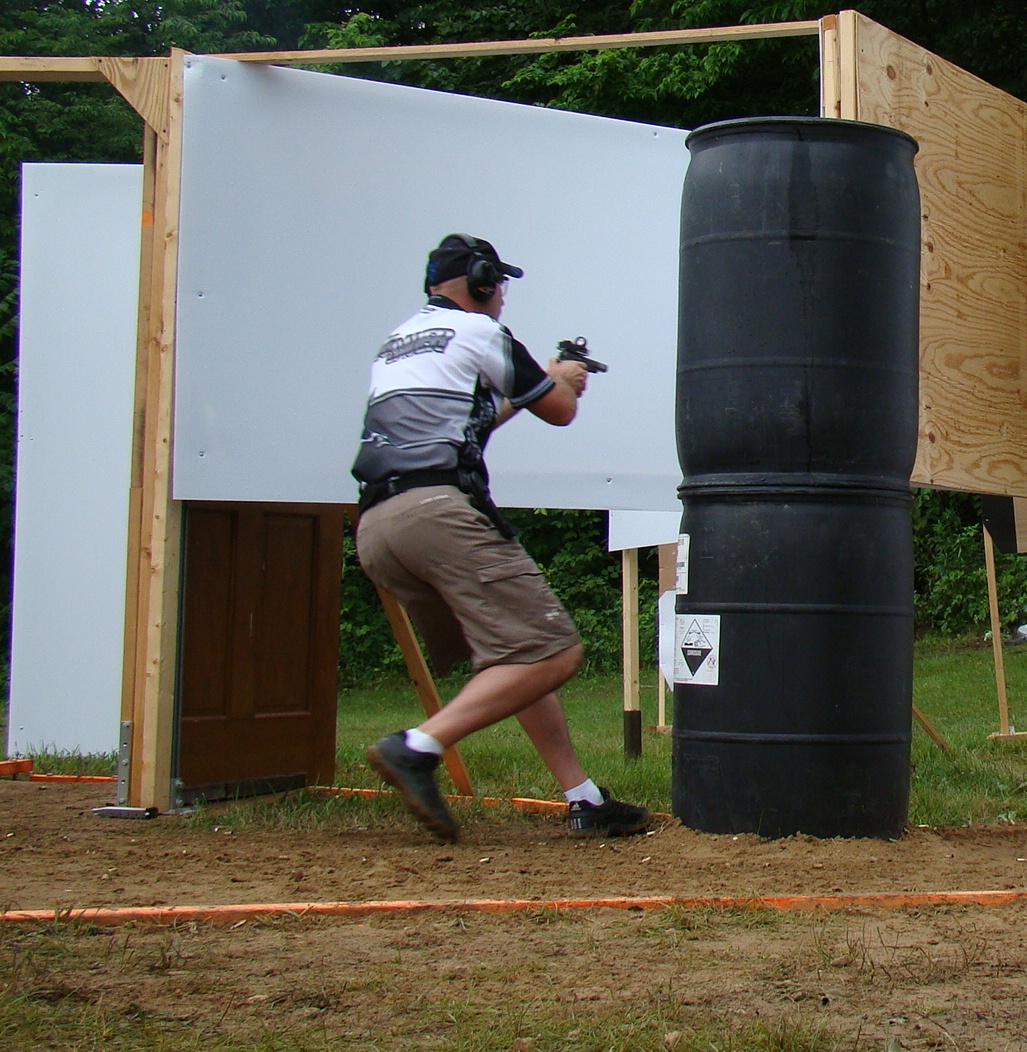 Area 5 attracted some of the top shooters in the game, including Open Division winner Max Michel, seen here moving in to a shooting position on Stage 8.

Also in attendance were Bob Vogel and Dave Sevigny, who shot the match prior to my arrival and as such dodged the lens of my camera. Although it’s quite possible they were both there and just moved faster than the human eye could detect.

Here’s Blake, also on stage 8 coming of the shooting position that Max is moving in to in the first picture.  A couple of neat things to notice on this picture – look at the muzzle on his gun, pointed safely downrange and away from his body even though he’s moving almost in the opposite direction of the berm.  This is one of those skills that comes from firing literally hundreds of thousands of rounds in practice and competition.  You simply know where the gun is and know exactly how to position it without really have to think about it.  In fact, he’s probably thinking about a cheeseburger in that picture.

Limited and Open weren’t the only divisions represented at Area 5 of course.  Production division winner Dave Sevigny was chased by a couple of great shooters, in Ben Stoeger and Matt Mink. Ben you may know from the 2nd episode of Top Shot, and Matt Mink is one of Team CZ’s shooters, rocking the SP01 in Production Division. 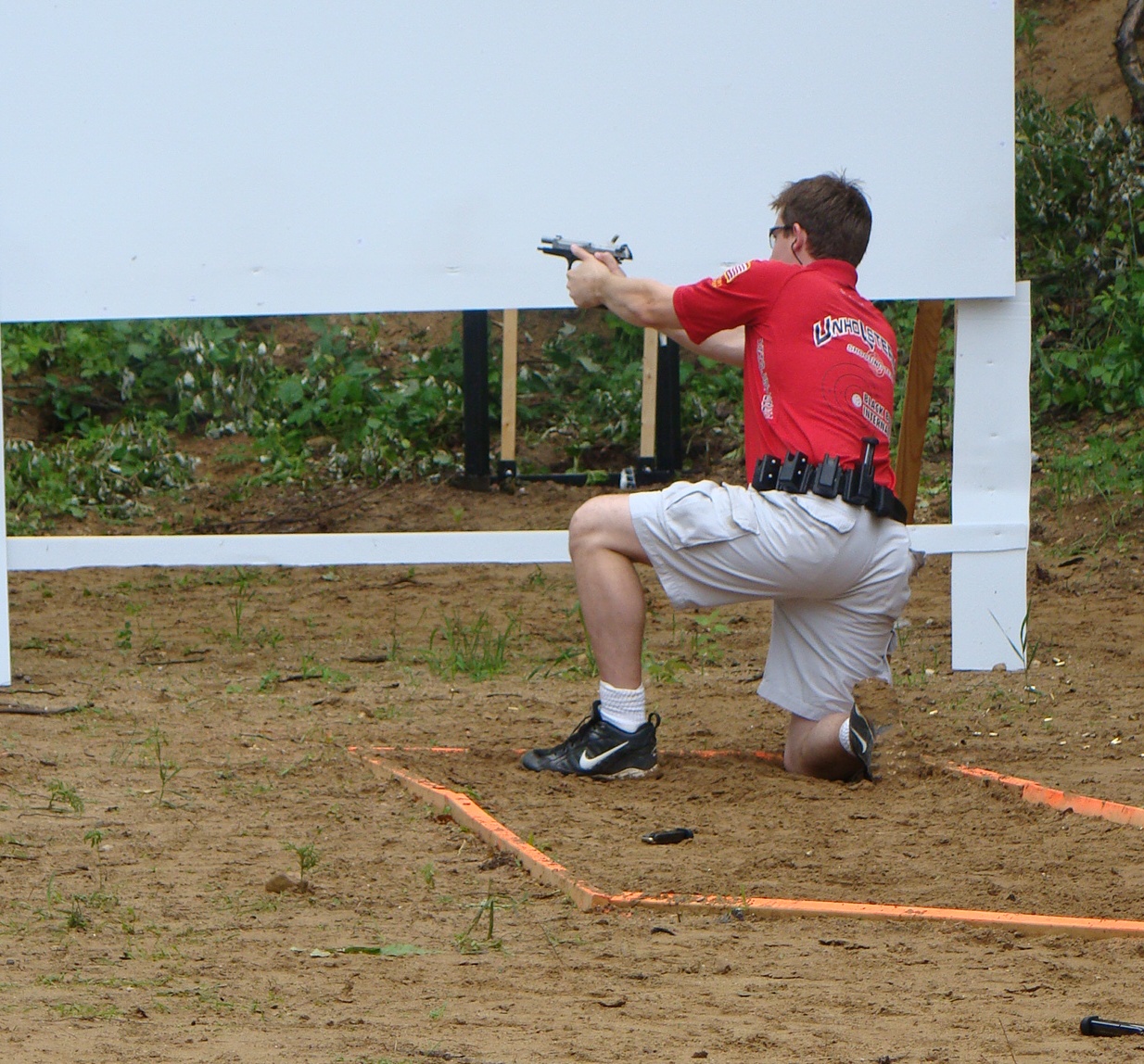 Here’s Ben, rocking his Beretta 92G Elite on one of the more complicated stages.  You had to engage a pepper popper under that low wall, then transition 45 degrees to hit a max-trap target that was briefly exposed from behind a no-shoot.  Ben makes it look easy.

Now, all these pro shooters are great and fun to look at, but you’re probably wondering how I did.  Well, to be honest I’m a little disappointed in my performance.  Not my shooting, mind you, but rather the mental aspect of planning the stages.  Going in to the match my goal was to think less about the stages and not spend a ton of time walking through them and planning out every last detail.

I failed that plan like whoa.  After the first day of shooting, I was in 3rd place overall in revolver division.  I made the mistake of LOOKING at the standings after the first night, which immediately sent me in to “must over-analyze everything” mode on the second day of shooting and I definitely suffered.  To be clear, I’m not upset with my shooting.  I was generally able to execute the plans I had for the stages, it’s just that the plans I made were not nearly aggressive enough in most cases.  I focused too much on shooting points and not enough on the balance of points and speed.  The two stages where I finished well were of course the stages where I actually attacked the course.  This is the biggest hurdle for me transitioning from being an IDPA shooter to an all sport shooter – in my two favorite games, IDPA and Steel Challenge, they’re all essentially “stand and shoot”.  To aggressively attack an IDPA course doesn’t require nearly the strategy and planning that a USPSA course does, and so I end up not hitting the courses hard enough.  It’s a weird learning curve, but I’m enjoying the ride.

I will say this though – it’s going to be weird when I switch to Production as part of the Quest for Master Class.  Have a gun with 10 bullets in it is going to feel like having the unlimited ammo cheat enabled!

I had a great time at Area 5.  My squad was a great group of shooters from Indiana, people I know from Atlanta Conservation Club; as well as a fellow revo shooter (from Canada!) who was running one of the sickest customized 625s I’ve seen.  My revolver is basically a factory 625 with some minor tweaks, his was a full on Apex Tactical Custom gun with 6 lb trigger, bobbed hammer, LPA target sight, titanium cylinder, 5 inch barrel, I mean LOADED.  I’m not going to lie, I coveted just a bit.  I’ll be back at Area 5 next year time and money willing – initially this match was my consolation prize for not getting to shoot Bianchi Cup, but now I want to make this a regular thing.