Email from a reader: Caleb, what gear to do you use when you’re shooting IDPA and USPSA with a revolver?

I actually use the same gear across both games – since I’m primarily an IDPA shooter and generally only shoot USPSA to help me get better at IDPA, I use my IDPA gear when shooting USPSA. 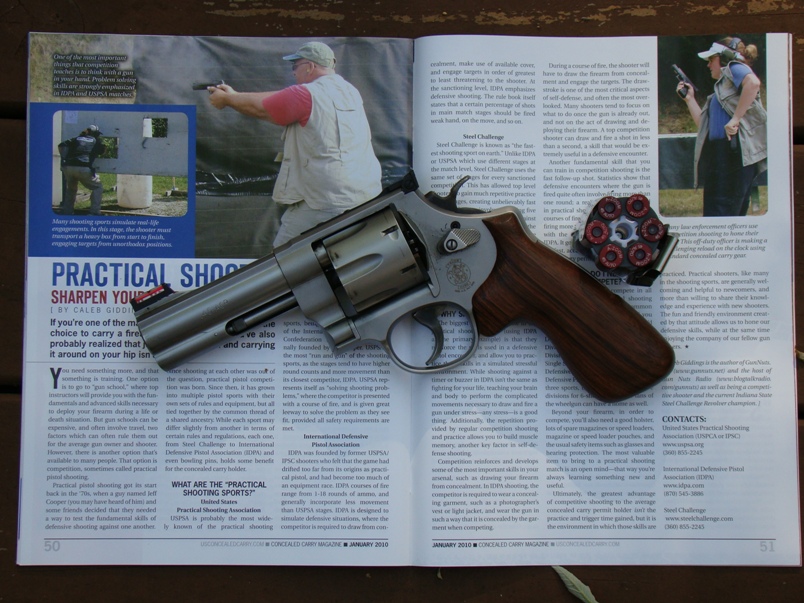 The gun of course when I’m shooting revolver division is my S&W 625 with a Hi-Viz fiber optic front sight and Bowen Rough Country rear sights.

For a gunbelt, I use a Blackhawk Instructor belt that’s given me good service for the last two years of heavy use in competition shooting; in fact in the two years since I got it from Blackhawk as part of a swagbag the velcro is still holding strong.

My holster is a Blade-Tech Belt holster – nothing special, but it holds the gun well while still giving a pretty rapid draw.  I’ve been timing my draws over the years, and on my fastest day drawing to open paper, I can get that draw down in the 1 second range to an “A” hit.

Moonclip holders are from California Competition Works, and while for an IDPA match I only need three, for a USPSA match I’m usually running 7 or 8 moonclip holders across the belt.

The most important thing about competition gear is that it needs to be reliable.  Lots of people tend to think that if their gun is reliable they’re good to go; but they don’t look at the entirety of their carry or competition system.  That’s why people will spend $600 on a carry gun and then buy some crappy nylon holster from Uncle Bob’s or something.  If you’re carrying a gun to defend your life or to play a game, take the extra time and make sure your gear is as good as the gun you’re carrying.

I like this rig so much that I even use it in ICORE competition, although I do download the .45 a bit since I don’t need to make major for an ICORE match.

FTC: With the exception of the belt from Blackhawk, I bought everything I’m endorsing here with my own cash.