I shot the IDPA classifier match yesterday with Tam which by itself would have been worth a post or two, but I was also shooting my Smith & Wesson 686SSR for the first time as well.  I wanted to get classified in Stock Service Revolver Division for the upcoming IDPA season as well as get some trigger time on the gun I’m planning on shooting in ICORE’s Retro Division.  The 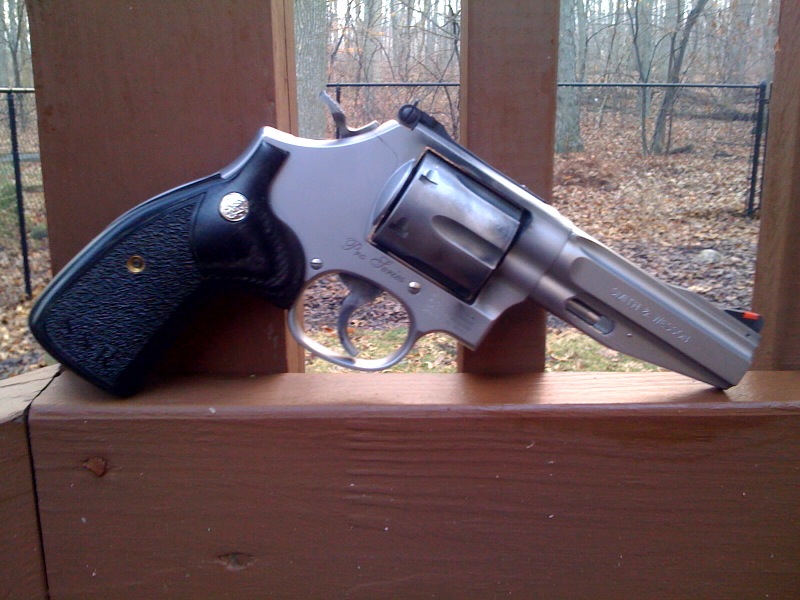 gun itself is a 4 inch Smith & Wesson 686 with a slab sided barrel, red ramp front sight (more on that later), wood stocks, chamfered charge holes, a trigger overtravel stop, and generally a pretty nice double action trigger pull.  The single action trigger breaks around 4 pounds – that’s pretty much irrellevant though, because this gun won’t have a single action mode for much longer.

I shot the classifier using my Blade-Tech holster, which interestingly enough fits my N-frame revolvers and this smaller L-frame.  For speedloaders, I used the nearly ubiquitous HKS style speedloaders instead of the more “competition” popular Comp-III loaders.  The reason for this is that I discovered I was having the occasional “yard sale” with the Comp-III loaders.  Since I first started shooting a wheelgun with a moonclip gun, my desire is to grab the speedloader as close to the main body of the loader, aka the part where the bullets are. When doing this with a Comp-III loader, I’d sometimes hit the release at the top of the loader and fling my rounds all over the planet.  Loading with the HKS loaders is very similar to loading with a moonclip.  You grab the loader by the black part, not the silver knob, drop the whole loader into the cylinder then twist the knob and flick the loader away.  In practice I can hit a 3.5 second reload using this method, and on the range I averaged about 4 seconds on reloads.  Not great, but not terrible all things considered.

The actual classifier match didn’t go poorly, although I dropped way too many points on the 7 yard stage because I was pushing too hard for speed.  The first three strings on the classifier are all 2 shots to the body and one to the head from the holster.  My average time for those strings was 2.56 seconds, which is great…except that I dropped a head shot on the first target!  You can’t do that at 7 yards and expect to still make Master class, and I didn’t.  While my raw time was smoking fast, coming in at 86.23 for shots fired, I had to add 23 seconds(!) for points down, putting my overall classifier score at 114.23.  That’s good enough for Expert class, which I should be happy with, but I know I can shoot better.

But how did the gun do?  Just fine.  Despite shooting smoky CCI Blazer lead ammo, extraction stayed positive and rounds continued to drop into the gun pretty handily.  The only part of the gun I’m not really in love with is the red ramped front sight.  I generally prefer post sights on my guns, and the red ramp sight is huge, I mean absurdly huge.  At 20 yards, the front sight basically obscures the entire target, and the rear notch doesn’t let a whole lot of light in around the front sight.  I’ll probably end up switching out the front sight for something a little faster that shows a little more light on the sides of the post.  Other than that, I’m completely pleased with this gun.  For a gun I’d never fired before, going out and shooting Expert on the IDPA classifier is pretty cool – I’ll just need to practice more!

Note: The S&W 686SSR was provided to me as a Testing and Evaluation gun by Smith & Wesson.  At the end of the T&E period I liked it so much I decided to buy it instead of returning it.