Steve from The Firearm Blog was kind enough to grab a couple of pictures of the 4.25 inch M&P Pro Series .40 from Smith & Wesson for our use here at Gun Nuts. 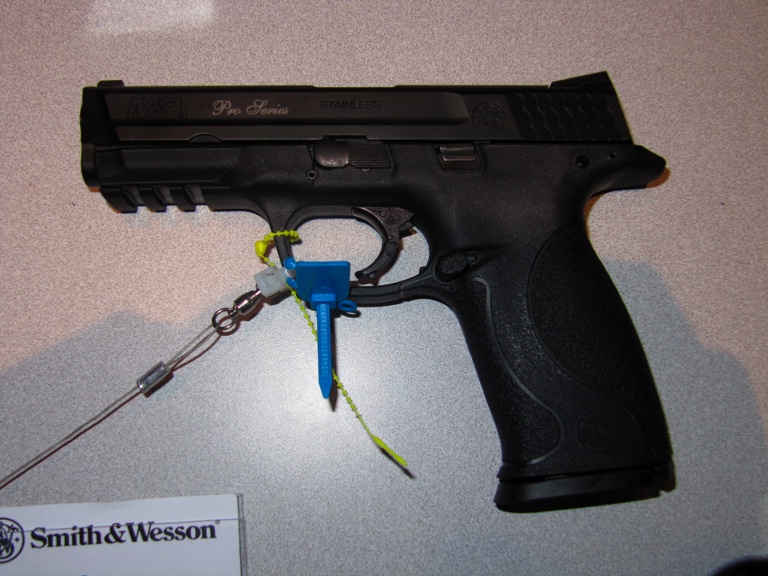 Click the image to make it fullsize – as you can see from the pic, the Pro Series .40 with the short slide doesn’t have a lot of cosmetic differences from it’s non Pro Series brethren in .40.  The big difference is in the stuff that you can’t see, namely the competition trigger, no magazine disconnect safety, and general radness.

From the factory, it looks like the M&P .40 Pro Series guns are going to be wearing Novak night sights for concealed carry use.  A lot of people think that the “Pro Series” guns are just competition guns – that’s not true.  The Pro Series represent guns designed for the competitive shooter, or the armed professional; which is why they include a 3 inch Model 60 with night sights, and starting in 2010 several more dedicated defensive firearms. 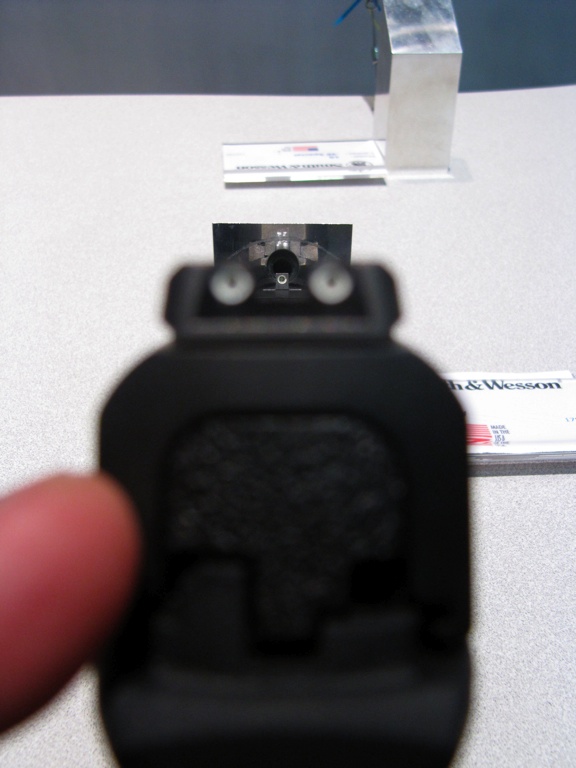 Click this image for a larger version – I’m actually quite amused by this picture, aside from being a good photo of the factory Novak night sights on the M&P Pro Series .40, Steve also perfectly captured what your sight picture should look like!  Notice that the front sight is crisp and clear while the rear sight is kind of blurry.  Nice photo.

Back to the guns themselves, I’m hoping to get a long slide (5 inch slide) model out of S&W for testing purposes later on in the year so we can really wring one of these guns out.  I’m also (of course) interested in the 4.25 inch Pro Series guns, both the .40 and new 9mm that they’re releasing as well.  I relate these guns to the Commander sized 1911 vs. a full sized 1911 – the longslide M&Ps have a 5 inch slide, and the “standard” guns have a 4.25 inch slide.  Now, I may be the outlier, however I’ve always preferred the Commander sized 1911s to the full size guns.  I’m curious to see if given the opportunity to shoot them side by side if I’d prefer the 4.25 inch M&P Pro series guns to the 5 inch long slide guns.

All the M&P Pro Series pistols come out of the box with no magazine disconnect safety, Novak sights (the 5 inch guns come with a fiber optic front), and a trigger pull in the area of 4 lbs.  If you’re looking for a gun to shoot Production Division (in 9mm) or Limited/Limited-10, and you don’t feel like dropping a kilobuck on a 1911, check out the M&P Pro Series.

FTC Disclosure: No promotional consideration from Smith & Wesson was received for this post.