Personally, I saved the gun I’m most excited about for my “last” post, which coincidentally will show up highest on the page.  This gun is the 7 shot Ruger GP100 in .327 Federal Magnum.

The new GP100 in .327 Federal Magnum features a 4.20″ stainless steel barrel and an overall length of 9.50″. It weighs 40 oz., holds seven rounds, and includes a fully adjustable rear sight. All GP100 double-action revolvers are known for their rugged construction and reliable performance, utilizing solid steel sidewalls (no side-plates) and frame widths that are increased with extra steel in critical areas that support the barrel. GP100’s are built to last, and the addition of the .327 Federal Magnum adds diversity to a proven product line.

Personally, as a revolver shooter I’m more interested in getting my hands on this gun than I am on the SR9c Compact.  As I mentioned in the Blackhawk post below, I’m intrigued by the .327 Federal cartridge, especially with the versatility that it brings to the table in the rugged GP100 platform.  The capability to fire everything from hot .327 Federal loadings down to pansy-weight .32 S&W Long loads means that the new GP100 in .327 Federal will be a great revolver for target practice, new shooters, self defense, and concealed carry. 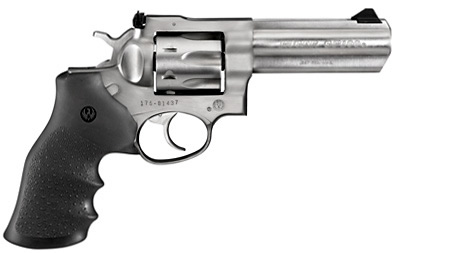 With a fully adjustable rear sight, and Ruger’s easy to change out front sight, the new GP100 in .327 Federal could also be a great platform for an ICORE revolver.  In ICORE’s Limited Division, 7 and 8 shot revolvers rule the roost; usually the S&W 686 and 627 are the most common platforms.  However, unlike USPSA and IDPA, ICORE allows .32 caliber revolvers as “main match” competition guns.  I’m SURE that TK Custom will be able to churn out moonclips for the new GP100 capable of holding 7 .327 Federal cartridges.  I’d love to see a little variety in the competition wheelgun world, as right now it’s dominated by Smith & Wesson revolvers.

The new Ruger GP100 in .327 Federal Magnum positions itself nicely in Ruger’s new 2010 lineup of defensive firearms.  Marrying the nigh-indestructible GP100 platform to the .327 Federal cartridge means that you’re going to have a light recoiling, fun to shoot revolver that would make a great defensive firearm as well.  I can’t wait to get my hands on one of these – I’ve been waiting for a midsized platform in .327 Federal since the round was announced last year, and now I’ve got it.  Now to convince IDPA to allow .327 Federal as a competition round…