The gun below is one I’m trying to get my hands on so I can really wring it out – it’s the Charter Arms .327 Federal Magnum with a 3 inch barrel.  I’m intrigued by this cartridge – in theory it could be the coolest thing to happen to concealed carry wheelguns in a long time.

I mentioned above that my wife is starting her search for a carry gun – being a fashionable woman, she doesn’t want to carry something that is “ugly”, “clunky”, or “too big”; all of those being words she’s used to describe my various carry guns (with the exception of the .25 ACP Jetfire, which is “cute”).

Having her at the NRA show was a great chance for me to expose her to all the different types of carry guns available, guns she had never seen in Gander Mountain.  Seeing as I’m a big fan of Taurus, our first stop naturally was the Taurus booth. 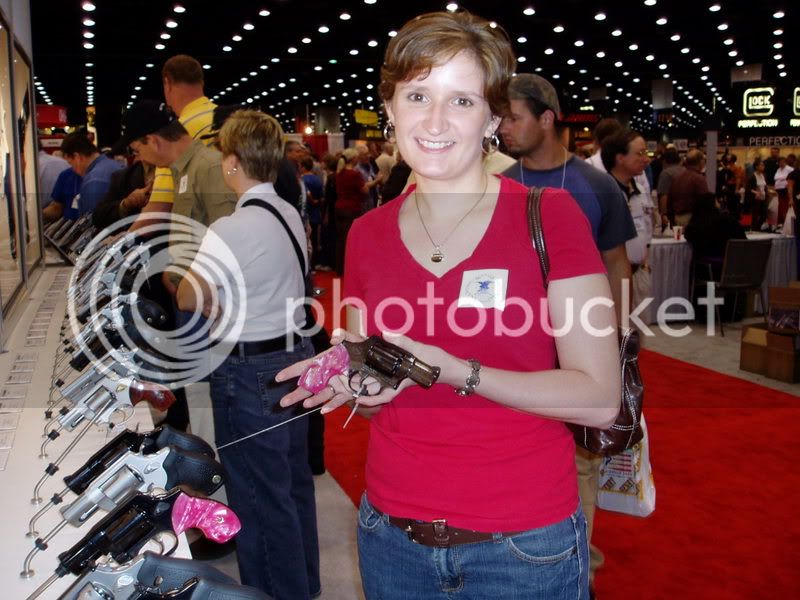 Mrs. Ahab immediately set upon the Taurus Model 85, which Taurus makes in about a jillion different configurations; they can be had in stainless, titanium, pearl grips, wood grips, etc.  This particular model has a blue frame and pink pearl grips, which while I certainly wouldn’t carry it, has a lot of appeal to Mrs. Ahab.  I do have to admit, it is a bit odd for me to see what I consider to be a “no-nonsense” defensive revolver in such a colorful package.

Knowing my other favorite gun manufacturer, it shouldn’t be too much of a surprise that our next stop was the Beretta area.  My wife had previously tried out a Tomcat to see if it fit in her purse, and she liked that the gun fit well into her very small hands.

Personally, I’m a big fan of pocket sized Beretta pistols, but that shouldn’t be too much of a surprise for anyone.

I like the Tomcat specifically because it pushes a bigger bullet than my .25, without adding too much significant recoil impulse to the pistol.  Plus, it’s tremendously light and easy to carry.

It’s not quite as pretty as the Taurus, but with the right grips my wife said she’d actually kind of prefer it to the Taurus.  Her reasoning was pretty sound, the flat shape of a semi-automatic is a lot easier for someone her size to conceal, even if she’s limited to purse carry only.

We were on our way to the Charter booth so she could see the multi-colored Charter revolvers when my wife literally grabbed my arm and said “those are soooo cute!”  Anything that elicited that kind of reaction from her was worth checking out, so I looked around and realized she was looking at the mini-revolvers from North American Arms.

She grabbed the Black Widow so fast it literally made my head spin.  I’ve long advocated the .22 Magnum as a preferable alternative to the .25 ACP in a tiny defensive pistol, and was tremendously amused by the concept of my wife arming herself with a gun called “Black Widow”.

Obviously, my only concern about this particular platform for a defensive weapon is that all the NAA revolvers are single action only, which would require that Mrs. Ahab shoot it a lot in the initial phases to get accustomed to the platform.

Despite the fact that we’re the same height (both Mrs. Ahab and I are 5’6), she has tiny hands.  A big concern for her in choosing a carry gun is her ability to grip it well and one that feels comfortable when she’s using it.  The Black Widow’s rubber grip actually fit her hands pretty well.  As you can see in the picture, in her hands it looks like a much more fearsome weapon.

The last booth we hit up was the Charter Arms booth – Charter makes a series of their budget snubbies in various colors, including one in Gold & Black that we promptly christened The Boilermaker Special (for my none Hoosier readers, Purdue’s school colors are gold and black).

This is the pink and aluminum framed Charter, probably her favorite.  There was a red one that matched her shirt as well, with a black cylinder that she wasn’t as fond of the color on.

For choosing a carry gun, this was actually a pretty great event for both her and me; the nice thing about the NRA show is that you get the opportunity to handle the guns, see what feels nice when you’re holding, test out the trigger pull (in a safe direction), and generally get a feel for the weapon that might be difficult to do in a gun shop.

My thoughts on the whole process are pretty straight forward: I love that manufacturers like Taurus, NAA, Charter, and others are introducing firearms with aesthetic features to appeal to some women.  Not all women appreciate the beauty of a deep blue finish and rosewood grips – and you know what?  That’s fine with me.  I have different tastes from my wife, and if she wants a “pretty” gun, who am I to judge it as not being sufficiently badass?  As long as when she needs it to go “bang” it does, it’s just as valuable a carry gun as my any one of my Berettas.